My Path to Becoming an M1 Garand Collector, Researcher and Author, Part 3 By Scott Duff

In addition to participating in IPSC competition, I began to shoot in Service Rifle matches.  I was shooting in four matches a month, practicing with pistol and rifle weekly, and spent my free time cleaning guns and reloading ammo.  Great fun!  I wish I had kept track of how many rounds I fired in both platforms, but I did not.  My best guess is that in the 1980s I was somewhere between 50,000 and 75,000 rounds.  It could have been higher.  I don’t really know for certain, but that is a good guess of the range.

While competing in the shooting sports, I also I had become interested in collecting US martial arms.  I bought a very good condition Remington Rand M1911A1 pistol and I of course had my Winchester Garand.  Keep in mind that there were no books on collecting M1 Garands.  The only book on the subject was “Hatcher’s Book of the Garand,” which I of course had purchased and read from cover to cover several times.  Ken Hackathorn introduced me to John Miller.  John knew more about martial arms than anyone I had ever met, in both the historical and technical aspects.  To this day he remains one of THE most knowledgeable people on the planet on these topics.  By telephone John walked me through my Winchester Garand, part by part, as much as was known at that time..  It turned out all that I needed to make my DCM rifle correct was an op rod, trigger group, bullet guide and stock assembly.  I was no longer disappointed in my ‘once in my lifetime’ M1 rifle being of Winchester manufacture.

This was about the time a large quantity of M1 rifles had been repatriated (imported) from South Korea by Blue Sky, later to become Arlington Ordnance.  Having an FFL allowed me to purchase quite a few of them.  I sold many and kept one Springfield that was suitable for restoration to as-manufacture WWII configuration, and one to build into match condition in 7.62 NATO to act as a backup for my M1A.  I had learned from traveling around PA, OH, and WV to matches that you needed to have two competition pistols and two competition rifles.  It seemed that the farther away from home the match was, the more likely your firearm was to fail in some way.  Hence, two is one and one is none.  (Thank you Clint Smith for that wisdom.)

By the end of the 1986 IPSC season I was becoming a bit burned out.  Work responsibilities and travel were increasing.  As a result I had less time available for shooting and reloading.  At the year-end awards banquet in November, I stepped down as pistol league director.  The couple I was sitting with at the banquet mentioned that they had seen an advertisement in the latest issue of Shotgun News about a new organization named the Garand Collector’s Association or GCA.  The founder was some guy from Kentucky by the name of Dick Deane.  On Monday I mailed off a check and in early December I received Vol. 1, No. 1 of the GCA Newsletter.  The information presented was fantastic!

By the time of the GCA founding I had made several research trips to SANHS while on the way to or from vacations at Cape Cod.  I had developed a friendship with the Bill Muse, the Superintendent of SANHS.  Bill and his staff could not have been more helpful and accommodating in my research trips.  I also contacted Dr. Edward C. Ezell, National Firearms Collection Curator of the National Museum of American History at the Smithsonian Institute in Washington, DC.  Dr. Ezell was kind enough to mail me photocopies of a 1946 dated Project Supporting Paper (PSP) with appendices that contained the level of detail that I had been seeking.  In early 1987, I began writing articles for the GCA’s quarterly newsletter.

One of the biggest questions that Garand collectors had was: “When was my rifle made?”  In August of 1987 I finally succeeded in developing an approximate Month End Serial Number Tables for both Springfield Armory and Winchester Repeating Arms Co. M1 rifles.   These tables were accurate enough that further research has shown they have stood the test of time well.  My work on these Tables was back in the days before everyone had a home computer.  I used a tablet, pencil, and calculator to create those tables and experienced numerous failures and a lot of torn up paper before I was satisfied with the results. Dick Deane published my article and accompanying serial number tables in December of 1987 in GCA Newsletter, Vol. 2, No. 1.  That article and tables were a game changer in Garand collecting.

The other big question facing Garand collectors was: “What did my rifle look like when it left Springfield or Winchester?”  By accumulating enough data sheets on known original rifles, we were able to determine originality and correctness of rifles.  But getting that information out to collectors was difficult as the GCA Newsletter contained a limited number of pages and was published on four times a year.  So what to do?  My answer was to write and publish a book!

To find out what came next, visit us again for Part 4 of My Path to Becoming an M1 Garand Collector, Researcher and Author. 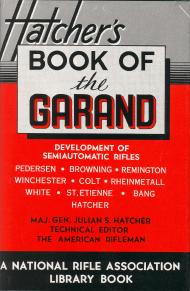 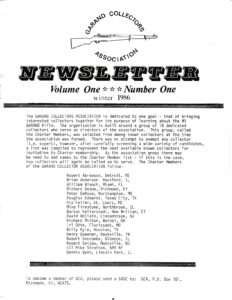