My Path to Becoming an M1 Garand Collector, Researcher and Author, Part 4 By Scott Duff

For most of the 1980s I was employed at the Pittsburgh based headquarters of a major national mechanical contractor that specialized in large industrial and commercial projects.  I worked in the law department as a contracts administrator specializing in claims and litigation support.  My activities included coordination with outside attorneys, document discovery, claims writing, contract writing, and preparing expert witness testimony.  My work experience prepared me for research and writing on the topic of the M1 Garand rifle.  Therefore, it seemed logical to me to transfer the results of my research at SANHS and the documents I received from Dr. Ezell into a book on Garand collecting.  There certainly was a need as no such book existed in 1988.  In addition, my stepfather owned a large printing company and as an FFL holder I had been selling M1 rifles and parts, so these contacts caused me to know what information collectors were seeking in a book.  I had access to a printer and I had a potential customer list.  And having had quite a few articles published in the GCA Newsletter gave me some name recognition with the membership.

I decided that writing the first book on collecting World War II M1 Garands was viable and would move forward.  My only impediment was that I did not own a computer.  Back then not many had a PC in their home.  My only option was to write the book using a tablet and pencil!  But how was I going to get it into a format from which it could be printed?  My stepfather came to the rescue by kindly offering to have it typeset by his printing company.

I began the project in October 1987.  The writing of text and photo captions, compiling data sheets, formatting the month end serial number tables, photographing rifles and components, and designing a the front and back cover took me seven weeks.  All while working at my 40+ hour a week day job.  I was motivated!  I finished the book in December and turned it over to my stepfather’s printing company.  In January 1988 he delivered 1,000 books.  “The M1 Garand of World War II” was of 6” x 9’ size with 77 numbered pages, 25 photographs, 8 data sheets, 7 tables, and 3 charts.  It was softcover and saddle stitched.  The retail price was $9.95.

For marketing I used my M1 rifles and parts customer list, contacted military parts dealers from their ads in The Shotgun News, and Dick Deane gave me a plug in the GCA Newsletter.  My hope was to sell those 1,000 copies of the first printing as that would give me enough profit to buy a home computer and one really good condition, original M1 Garand.  I had no idea what was about to happen.  To say that the book was wildly successful would be a huge understatement.  By April 1993, when I took it out of print, I had sold 10,000 copies!  No one was more surprised than I.  It was the right subject, at the right price point, and exactly the right time.  Garand collecting had exploded in popularity due in large part to the repatriation of hundreds of thousands of M1 rifles returned to the United Sates from South Korea.  This caused great growth in the membership of the GCA, which further fueled interest.

The next question became “What to do next?”  My response was to write and publish “The M1 Garand: Post World War II” (the large blue book) in 1989 and follow that up with “The M1 Garand: World War II” (the Big Red Book) in the fall of 1993.  In September of 1994, I ended my corporate career and became a fulltime writer and publisher and dealer in collectible US martial arms and accoutrement.  Someday I’ll tell you how that transpired as that story contains interesting twists and turns that continue to affect Garand collectors and shooters to this day. 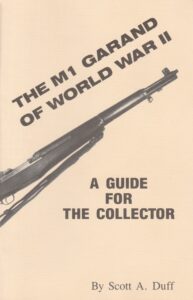 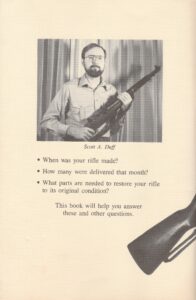