US INFANTRY WEAPONS IN COMBAT 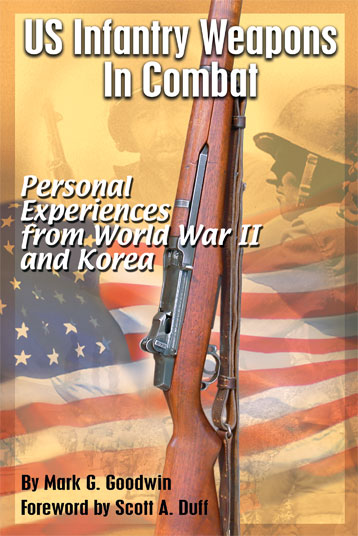 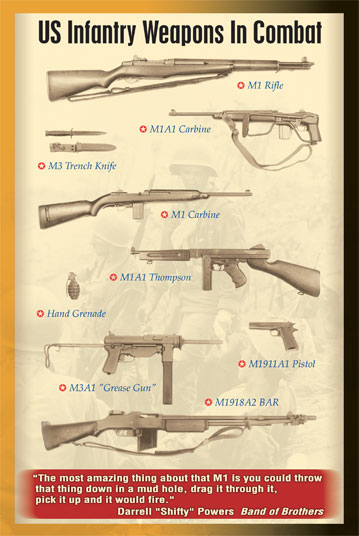 by Mark G. Goodwin
with Foreword by Scott A. Duff

The first thing that the reader must know about this book is that it is a gun book.  It is not simply war stories, but sixty-five interviews with soldiers and Marines specifically relating their experiences with the US infantry weapons in combat during World War II and in the Korean War. The differing opinions of these men is fascinating. One man loved the M1 rifle and hated the M1 carbine while the next loved the M1 carbine and hated the M1 rifle. Based upon his personal experiences each man had his own opinion on the weapons that he had used during these wars and relates those observations to the reader. So much of what we collectors and history buffs think we know about the use of US infantry weapons in combat has been derived from two sources: movies and books. Some movies, like “Band of Brothers” are very accurate, others are not. The general history books of these wars rarely contain the in-depth details of infantry weapons that would be of interest to collectors. The stories about US infantry weapons contained in this book are the real hands-on experiences of the men who actually used them for their intended purposes. Once I began reading these interviews, I could not put the manuscript down. – Scott Duff

The following are excerpts from three of the sixty-five interviews presented in the book:

Shifty Powers, E Co., 506th PIR, 101st Airborne Division, the “Band of Brothers” – As a rifleman, they expected you to carry an M1, but they weren’t very strict about it.  If you could pick up a Thompson submachine gun you could carry it or a carbine, whatever. Most everybody stayed with the weapon they were familiar with. I swapped one time; we were getting ready to make a jump before Holland. We were out at the airfield, but Patton overran the drop zone. While we were at the airfield, they came out and told us the area we were going to drop in; the Germans had a lot of guard dogs. Well, I’m kind of a little bit scared of dogs, so I talked to another guy about swapping, I gave him my M1 and he gave me his Thompson. I figured I could spray the dogs. They called that jump off, so I went back and swapped back with him. The Thompson was a good weapon, the only fault I heard about the Thompson was that you had to keep them clean or they would jam.

The most amazing thing about that M1 is you could throw that thing down in a mud hole, drag it through it, pick it up and it would fire. It wouldn’t jam; it would fire. What we did mostly was keep the outside of it as clean as we could with a rag or something. And we’d clean the bore out as often as we could. Any time we were off the line we’d clean the rifles well. In combat, when you were right on the line you don’t take time out to clean the rifle. You just kept the mud and dirt wiped off the outside of it the best you can. They were outstanding weapons, that rifle worked all the time.

Robert Mort, 1st Marine Division – When I landed on Iwo, I was carrying my BAR and wore a BAR belt. The belt had six pockets, with two magazines in each pocket. That gave me 12 magazines in the belt and one in the weapon.  It was a lot of weight! I wasn’t issued a bayonet, but I carried a Ka-Bar. The assistant BAR man, who happened to be the biggest man in the platoon, carried six more magazines for the BAR. He carried a carbine for himself and he had a belt with three pouches for BAR magazines that could be slung over his shoulder.

I was wounded on the night of the 7th of March; I almost got through it. We were on an OP about 100 yards in front of our lines. A Jap came in from behind us and dropped three grenades in our hole. They were looking for water mostly; they had run out of water and all they had was the sulfur water from the island. All three of us on the OP were wounded. I came out the luckiest; the other guys were wounded much worse than I was. When they came out and took us from the hole back to our lines, I was the last one out and the Jap came in to get my canteens. All he had was a bayonet and all I had was my Ka-Bar. I made it and he didn’t. 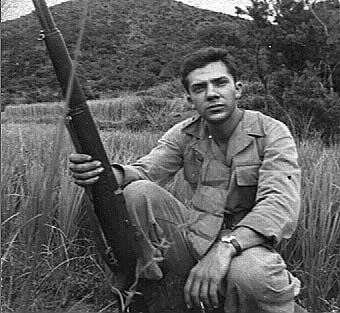 Jack Walentine, 188th Inf. Regmt, 11th Airborne Division. – It was around the end of November 1950, we were about 40 miles south of the Yalu River at the time. The battalion was in reserve, so we weren’t on the front line.  It was cold and we had a few bonfires going. We had some roving guards pulling security for us.  During the night, one of our sergeants got up to piss. He spotted a group of short horses and men passing through our area. He knew that wasn’t right and he jumped up on our mess truck which had a ring mounted .50 on it. He opened up on the group of Chinese and the horses. After he started shooting it was utter chaos.  I was asleep in my sleeping bag, but when I heard the first shot I opened my eyes. Standing directly over the top of me was a Chinese soldier with a Russian submachine gun. He was kicking my rifle away from my side. I cocked the pistol and fired at him through the sleeping bag three or four times. After the first shot I couldn’t see because feathers were flying everywhere. I only hit him one time, in the head, I’m not sure if it was the first shot or the second, third or fourth. The round knocked him over. My sleeping bag was ruined; it had a big 15-inch gash in it.  The next day I discovered that the slide of the pistol had left marks on my chest. It’s amazing that the pistol functioned in the bag like that.

Read what others are saying about US Infantry Weapons in Combat:

Most of us U.S. military weapons collectors have all, at one time or another, wished that “these old guns could talk.” While that’s not possible, the next best thing is to hear from their “spokesmen”; the guys who used them in combat. Author Mark G. Goodwin has assembled an interesting compilation of interviews from U.S.military combat veterans who used these weapons in combat. We collectors sometimes get so caught up in the hardware that we overlook the fact that these arms were looked upon by their users as simply tools to perform a dangerous and dirty, but vitally necessary, job. Every collector of World War II and Korean War U.S. military weapons should have this book on their shelves. The book puts a human face on what may otherwise be sterile and non-descript hardware. The book brings the small arms of WWII and Korea to life by re-telling the stories of the brave GIs and Marines who used the weapons on far-flung battlefields around the globe to protect our freedom at a crucial time in our nation’s history. – Bruce N. Canfield, author of “U.S. Infantry Weapons of World War II”

Riveting book, not only of the weapons themselves, but more interestingly the individual servicemans’ opinion of how they performed in the field.  Highly recommended! – Frank Iannamico, author of “American Thunder II, The Military Thompson Submachine Gun”.

Regardless of your interest in U.S. military weapons you will find “U.S. Infantry Weapons in Combat – Personal Experience from World War II and Korean” to be an informative and welcome addition to your library. Mark Goodwin has assembled first-hand accounts on the effectiveness, reliability, and dependability of a wide array of weapons. This is not movie “hype”, it is a true accounting by the men who used these weapons in combat. Presented here is information on who carried what, when and under what circumstances. Also included are numerous pros and cons on various weapons: ‘03 Springfield, versus M1 rifle; M1 rifle versus M1 carbine; M1911A1 pistol versus M1 carbine; Thompson versus Reising submachine guns; water-cooled versus air-cooled machine guns and much more. Other weapons reviewed are the M1C and M1903A4 sniper rifles, BARs, ’97 trench guns, bayonets, knives, hand grenades and rifle grenades, bazookas, rocket launchers, mortars, and flame throwers. This book will be an interesting addition to you small arms library. – Larry L. Ruth, author of “War Baby! The U.S. Caliber .30 Carbine”

This is a treasure trove of living history for the M1 Garand collector. The personal stories of its use in combat make you look at yours resting quietly on the wall and realize it might have been there with its brothers. This work is highly recommended for collectors, students, and historians! – Robert W. Seijas, founding member and Chairman emeritus of the Garand Collector’s Association.