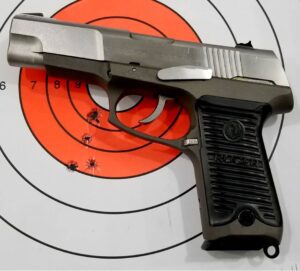 Today’s Thursday Day at the Range is brought to you courtesy of two Thursday Days at the Range ago, a shoot saved for a day when I could not make it to the range. You see, today instead of the customary range session I got the first fitting for my new hearing aids. Ironic, no?

Well, you might ask, what about the gun? Those who are regular readers of these Thursday Day at the Range reports will recall the Ruger P89 and P89X sessions. During the discussion of these Rugers the comment was made, “I have a P91DAO; have you ever had one?”

The P91 is, for practical purposes, the P89 in 40 S&W. I’ve not had a DAO (Double Action Only) Ruger. So, I thought I’d correct that deficiency.

A quick scan of GunBroker revealed two P89DAOs on offer; the subject pistol is one of them. Upon receipt, I tried some dry fire exercises and was pleased how well the trigger felt.

Here are the live fire results. In fairness, I don’t shoot DA revolvers a whole lot better than this DAO pistol. More than a half-century of nice single-action 1911 triggers can spoil one, eh?

There is an important lesson here. If you are going to carry a piece, practice with it. A few hundreds of rounds would go a long way to building proficiency with this DAO pistol, for example. I’m dubious at the prospect of ever shooting it as well as a good 1911, but improvement would definitely be in prospect.

OCTOBER SPECIAL: 5% OFF the AR-15 Bundle - USE CODE: BUNDLEUP5 Dismiss