What Is A Drawing Number??

What Is A Drawing Number?? 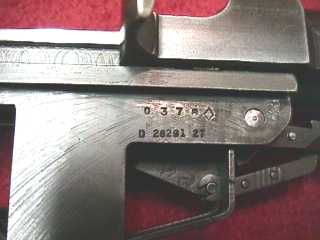 An understanding of the engineering drawing numbers which were stamped on some M1 parts is necessary in order to fully comprehend the evolution of those components. For example: A hammer may be marked C46008-2 SA. The “C” designates the physical size of the drawing. The “46008” is the engineering drawing number. The “-2” is the production revision to the drawing. And finally, the “SA” indicates that this part was manufactured by Springfield Armory.

The first production rifles manufactured by Springfield Armory were marked with an engineering drawing number on virtually every part which was large enough to be stampedÂ—and even some that were barely so, such as the buttplate screws. This practice fell by the wayside as the demand for increased production grew.

The drawing number stamped on many parts evolved through a series of changes prior to being deleted entirely. The dashes, gaps, and omission of spaces between letters and numbers are of great importance in the identification of components. Generally speaking, the evolutionary pattern of the drawing number began with a dash between the letter designating the physical size of the drawing, and the drawing number. The second step was the deletion of the dash, leaving a space between the letter and the drawing number. The third step eliminated the space. For example: the rear sight cover began production stamped B-8872. It then changed to B 8872, then B8872, and finally the number was deleted. This type of change in markings was common to many parts. However, this pattern was not always followed. Individual components must be studied in order to fully understand the complete rifle. This knowledge aids the collector in determining the chronology of some parts and identification of original rifles. Proper recording of such detail is critical when analyzing a rifle or preparing a data sheet.

The revision number of the component is most often the key to dating parts and is of primary interest to most collectors. Generally speaking, the lower revision numbers were produced first and the higher numbers last. However, review of the individual parts will reveal this was not always the case.

Another item to add to the confusion is a significant physical change of a part without the attendant change in the revision number. Once more, this did not happen often, but it did occur on certain components.

Excerpted from The M1 Garand: World War II copyright 1993 by Scott A. Duff