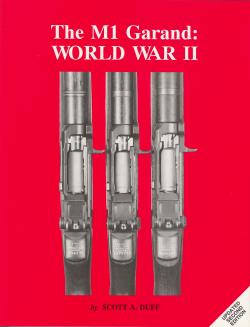 Volume 1 of the definitive reference set written specifically for the Garand collector. Examines development and production of the M1 rifle from conception through the closing days of World War II. The first Garands, the Gas Trap rifles, are examined in detail. The evolution of Springfield Armory and Winchester produced M1s are chronicled in Data Sheets and photographs detailing original rifles.

The variations of components are described and their period of use given. The collector is aided in identification of parts changes by detailed photographs and explanations. These descriptions used in conjunction with the Data Sheets allow the collector to verify original rifles or restore their M1 to correct configuration. Month-end serial number tables identify when your rifle was manufactured. Bayonets, slings, and cleaning kits are also examined in detail. The M1 Garand: World War II is 8-1/2″ x 11″, is Perfect bound with a laminated soft cover, has 320 pages and 230 photographs.

During World War II the United States combat troops were armed with, as General Patton noted, “…the greatest battle implement ever devised”, theU.S. Rifle, Cal. .30, M1! No modern war has been fought in which the individual weapon of one combatant nation so out-classed those of their adversaries.

“The M1 Garand: World War II” is the story of development and production of the M1 rifle from its inception through the closing days of World War II. The first Garands, the Gas Trap rifles, are examined in detail as are the reasons behind the conversion to a Gas Port system. Data sheets and photographs are presented to educate the collector on the finer points of the early M1.

The evolution of Springfield Armory produced Gas Port rifles is presented from the first deliveries in June 1940 through end of production in 1945. The changes are chronicled in Data Sheets detailing thirty-six original rifles. Photographs of many historically significant M1’s are included.

The activities of the Winchester Repeating Arms Company are examined in detail. Data Sheets and photographs are presented to depict the evolution of this interesting variation. Analysis begins with the first production Winchester M1, serial number 100001, and concludes with details of rifles manufactured in June 1945, Winchester’s last month of production.

Month-end serial numbers for both manufacturers are displayed to allow the collector to determine when his rifle was produced. Monthly quantities delivered are also charted.

The individual components are described in detail. The variations of each part are examined and the period of their use is given. Photographs depicting changes to components assist the collector in identification of parts. These descriptions used in conjunction with the Data Sheets furnish the collector with the reference material necessary to identify original rifles or restore rifles to their original configuration.

This work is the conclusion of eight years of research reviewing and analyzing thousands of documents and photographs along with examination of hundreds of rifles. The result; “The M1 Garand: World War II”is the most comprehensive study of the World War II M1 rifle available to collectors.

BUY NOW
We use cookies to ensure that we give you the best experience on our website. If you continue to use this site we will assume that you are happy with it.Ok