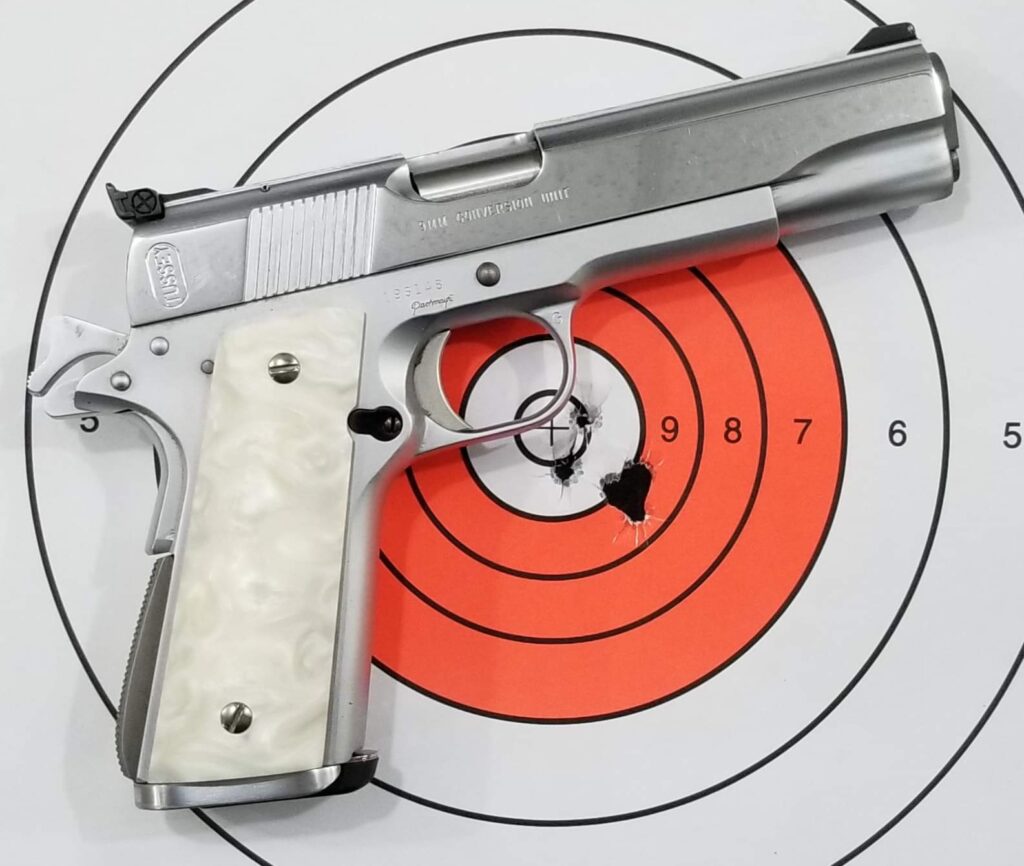 Some years ago, whilst researching “The M1911 Complete Owner’s Guide,” I came across a Pachmayr custom M1911 in .22 Long Rifle. It was built with a .22/.45 Conversion Unit. Nothing particularly puzzling there, except for one nagging question: what was the source of the frame? Clearly, the frame was produced prior to 1968, at a time when, while the serial number (if present) of American-manufactured firearms was to be marked on the frame or receiver, the manufacturer was free to place the company name and address and model name anywhere it chose. In the case of automatic pistols, generally, the manufacturer and model were marked on the slide, with the frame having only a serial number. That practice makes it difficult, sometimes, to identify the manufacturer when you only have the frame. In this case, Pachmayr took a frame, installed a Colt .22/.45 Conversion Unit, hard chromed it, marked the frame “Pachmayr,” and called it a day. So, who made the frame?

If the frame were from a Colt Government Model, the serial number would place it as a WWI M1911; but this frame is clearly post-1920’s, when the A1 slide cuts were introduced. I went to the length of tracking down and calling Paul Liebenberg, who had overseen Pachmayr’s custom shop prior to the acquisition of Pachmayr by Lyman. No joy; he had no idea.

One day sometime later I was perusing photographs that I had taken for the purpose of inclusion in “The M1911 Complete Owner’s Guide.” I saw something in the high-resolution image that had escaped my attention: the faint remnants of the Colt “Verified Proof” VP-in-an-inverted-triangle mark. Voilà! Now we were getting somewhere; it was a Colt frame. But why was the serial number so low? A moment later, it struck me: this was a Super .38 frame! (side note: while the cartridge is known as “.38 Super,” the corresponding Colt pistol was originally named the “Super .38.”) So, mystery solved.

But wait, there’s more! During my book research, I had come across a slide marked “Tussey,” complete with a 9×19 barrel. It had an odd recoil spring assembly; I called Terry to find out more about the assembly. While he cheerfully identified the slide as one that he had indeed built up, he told me that the recoil spring assembly wasn’t something he installed; in fact, he had no idea what it was, either. I was able to later identify the spring assembly as that included as part of the Accu-Systems compensator system. Mystery number two solved.

Keen-eyed observers will note that the slide is marked, “9mm Conversion Unit.” Yes, Virginia, there was actually a Colt 9x19mm Conversion Unit offered for about a year. It included the slide, barrel, recoil spring, slide stop, and ejector. The latter was probably what killed any demand for the product. Changing out ejectors is not a “pop-in/pop-out” process. Once you have driven out the ejector pin, identified and marked the clearance cut for the pin on the 9mm ejector leg, filed the cut, and installed the ejector including driving in the pin, you might think twice about the effort required to go back to the .45 ejector. Big deal? No, but it’s not a simple matter of switching slide assemblies. I found the 9mm Conversion Unit listed in the Colt catalogs for a year or two, but it quickly disappeared. So, not quite a mystery number three, but close.

Now, of course, a Super .38 frame has an ejector that will work perfectly well with a 9x19mm slide. You can see where this is going, or rather, where it went: a Pachmayr custom Super .38 frame with a Tussey Custom 9mm Conversion Unit. Hmm; it seemed not quite complete. What it needed was the right set of grips to complement the polished slide and hard chromed frame. Voilà (again)! Pearl! Yes, pearl would do nicely; thanks for the idea, General Patton.

So, there you have it: the Pachmayr-Tussey-Patton Pistol. 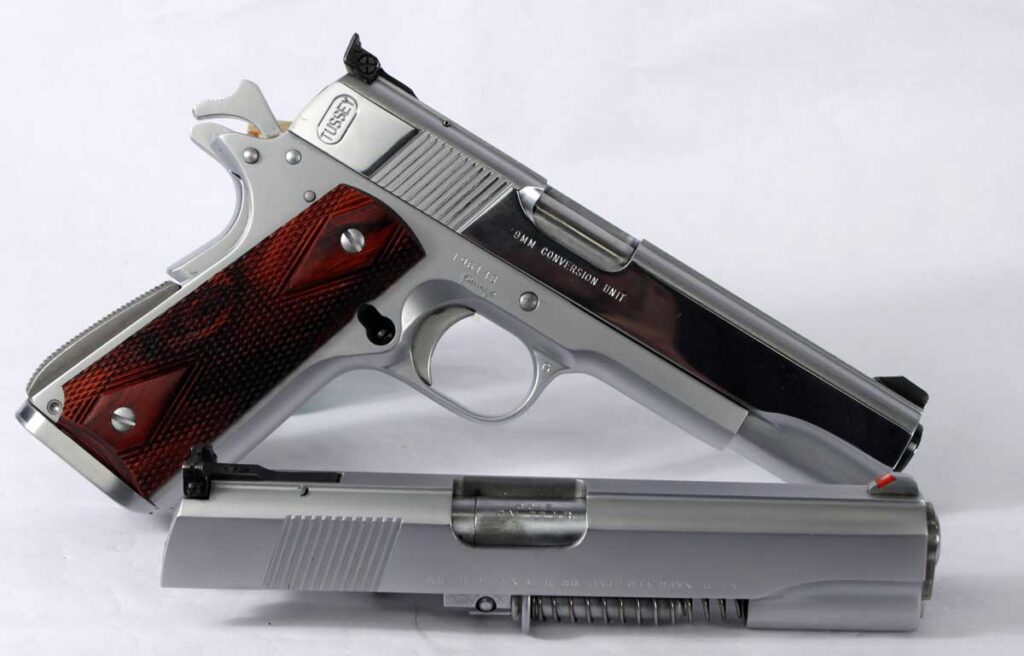