Why did we build two pistols for “The M1911 Complete Assembly Guide”? 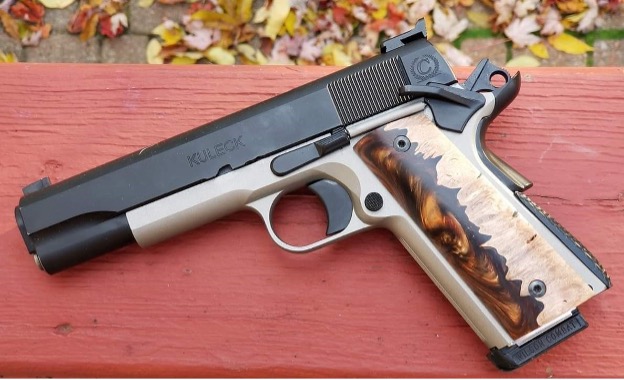 When we began working on “The M1911 Complete Assembly Guide” the first order of business was to complete the pistol begun during Larry Vickers’ build class, “LVP 011.”  We’ve told that story in a previous post.  What might not be obvious to the casual observer is that we, or rather, I, actually built two pistols for the book.  What also might not be obvious is why I built two M1911s.  After all, wouldn’t one pistol suffice to illustrate the build process and be the tangible result of our efforts?

The answer goes back to that Larry Vickers build class.  Larry produced a very specific “Bill of Materials” for the class, comprising those parts that, in his opinion, were most appropriate and which he wished to have his students learn to assemble.  The resulting configuration would be a representation of the early twentieth-century custom M1911.

Once out of the class and on our own, while Larry’s choices would make a very fine pistol indeed, in my case “LVP 011,” I decided that the readers of the Assembly Guide should have the opportunity to learn about alternatives to the conventional thinking of the era.  Thus, “WJK M1911” was born.

To get more learning opportunities, I decided to fit two different slide/barrel assemblies to the frame.  The one illustrated above is the “Retro” version.  It has traditional vertical serrations at the rear.  The sights are New Old Stock Millets.  The use of a front sight with tenon rather than dovetail mounting allowed us to show just how much fun staking a front sight tenon is, and why dovetail front sights are pretty much universal these days.

The second slide assembly, the “Modern” version, has Caspian’s honeycomb slide “serrations” rear and front.  The rear sight is the obligatory Novak, and the front is a tritium night sight on a dovetail.  You’ll find a rather amusing picture of that sight mounted backwards when you read “The M1911 Complete Assembly Guide.

Note: the grips have changed several times since this pistol was built; two iterations can be seen here.